Explaining “Vive La France!” and Why France Is a Very Patriotic Country

Each country has its own culture of showing patriotism. Many countries that were previously colonised but gained their independence centuries ago still continue to celebrate their day of independence. In countries like South Korea and China, citizens opt for traditional attires over western-style clothing for formal events. And in some countries, citizens prefer to speak the local language rather than the universal English language.

But one ultimate sign of patriotism is not how one talks or dresses, but rather the words uttered in the midst of crises. “Vive La France!” is arguably one of the most popular ones out there, a phrase dating back to the French Revolution and is still being used by the French today in times of great victory for France’s interests or as a battle cry for patriotism.

But what does it mean? And in times when people care more about their own interests rather than their country’s own, why has France managed to remain one of the most patriotic countries in the world. We discuss it in today’s article.

Simply put, the meaning of “Vive La France” in English literally translates to “Live France,” but if we translate it by its meaning, it can be interpreted as “Long Live France.”The word “vive” translates to the English word “live,”but in a French context, for someone to “live,” for something, they must show enthusiasm and excitement for something. And France is a feminine noun, hence why it uses the word “la.”

As far as the late 1700’s, the phrase has been a cry for the French who showed patriotism or love for their country. While it’s possible that the term had been used much earlier than the 18th century, historical evidence shows that the French began to use this cry around the time of the Storming of the Bastille. This is the first battle and a key event that took place during the French Revolution, which has much to do with French patriotism.

Let’s briefly go over what the French Revolution is. In the late 18th century, France was still a monarchy and facing an economic crisis due to the mismanagement of the country’s money.During that time, the class system was like a pyramid divided into three Estates: at the bottom, you have the everyday French citizens who made up most of the population; above them, you have the nobility and royals who; and at the top, you have the clergy.

While the citizens were struggling and starving due to the heavy taxes imposed on them, the other two Estates were rarely taxed, if ever, but continued to live lavish lives generally unaffected by the turmoil. This led to Enlightenment thinkers questioning why France needed a monarchy to reap the benefits of wealth when majority of the people were suffering.

When the reigning monarch at the time, Louis XVI, called a meeting of the Estates General, the fact that the two smaller Estates had more voting power over the Third Estate made the people realise that nothing would improve for them unless there was social and political upheaval for the interests of majority of the country. The result was the French Revolution, which consisted of immense change that resulted in the end of the French monarchy, the beginning of the French republic.

While this isn’t the only revolution or rebellion to take place in history, the French Revolution was arguably at the forefront of a movement that saw the decline of monarchies. Prior to the French revolution, most countries especially in Europe were ruled by monarchs who were given the right to rule based on blood alone. When the French Revolution began, even though the revolution was focused within France, other countries’ monarchs sought to help France and crush the revolution. Austria sought to help Louis XVI because his wife, Marie Antoinette, was the daughter of the Holy Roman Emperor Francis I, but the rest did so out of fear that if the rebels were successful at abolishing the French monarchy, their own subjects may be tempted to do the same in their own country. They were right to fear this because after the revolution, many monarchies were replaced with republics and democracies.

As mentioned earlier, it was most likely first used in the Storming of Bastille in July 1789. It’s most likely a shorter form of “Que vive la France,” which translates to “May France live.” At the time, majority of people were suffering under harsh conditions but were unable to do anything due to the systems put in place. By overthrowing the monarchy, the people who used “Vive La France” as a battle cry may have believed they were creating a better country for themselves and their countrymen so that they could not be oppressed by their own rulers.

For linguists and people who speak European languages, you may notice that the French language intersects with the language of its neighbours. For example, in the Spanish Revolution in the early 20th century, they would say “¡Viva la revolucion!” or “¡Viva Espaňa!” which sounds quite similar to France’s battle cry. But don’t get confused: “vive” is “live” in French, while “viva” is “live in Spanish.

After the French Revolution ended, the use of “Vive La France” continued as a show of patriotism. It’s like when you hear an American politician say “God Bless America” or a British national say “God Save the Queen.”While it’s been decades since the French had had a major war, rebellion, or revolution for its country’s interests, you can hear it from politicians trying to stir inspiration for patriotism and love for their country. Outside of these uses, you may also hear it on Bastille Day in commemoration of the people’s first step away to abolishing the monarchy.

With such a bloody and brutal struggle for its people, it’s clear to see why the French value its own culture and interests before those of other countries. But what exactly is patriotism? To put it simply, it is the act of being patriotic or putting your country’s interests first before anything else.

Patriotism isn’t always fighting to the death for one’s country or running for a government position just to control the country’s interests. An everyday patriot can show love for country by respecting their National Anthem and their own flag. And while you may not be qualified to run for a government position, you can show patriotism by voting for candidates you believe will act in the interests of the people. 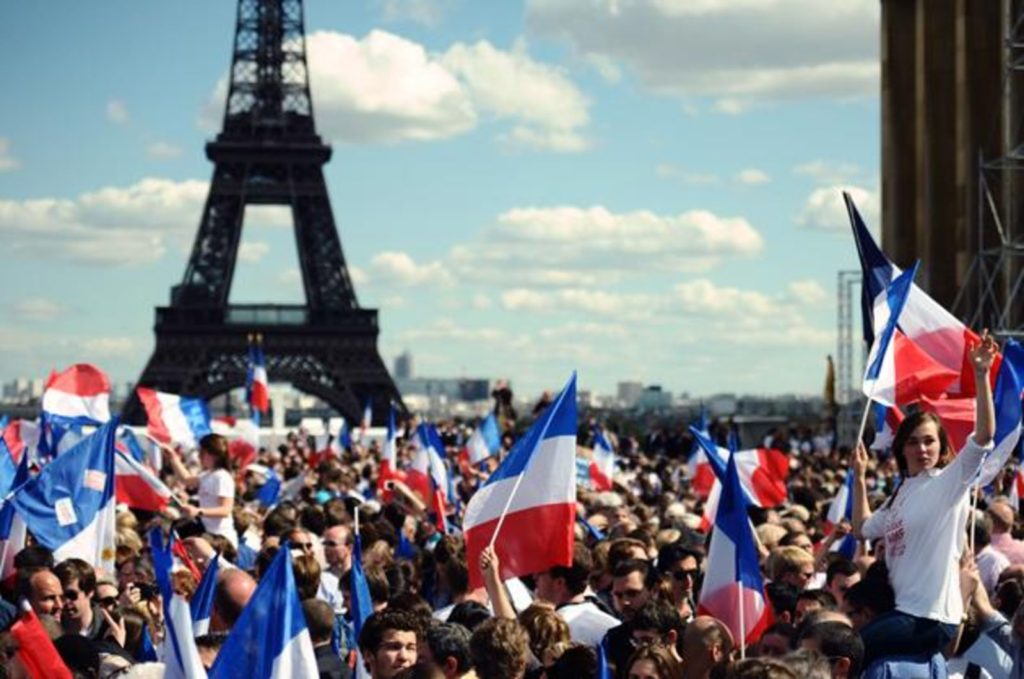 In the past, patriotism and nationalism were one and the same term. Lately, however, there has been a shift in both meaning and connotation. By definition, both terms involve a strong long for country. However, under patriotism, a person believes in the need for their country to promote positive values for the interests of most of its people and not just a select few.

In terms of France, however, it has proven to be a country filled with patriots who believe in the interests of their country rather than its superiority to other countries. With the country known for one of the most important events in human history that shaped most of the governments we know today, it’s easy to understand why their patriotism extends to this day and why, every year, you’ll hear millions of French men and women shouting “Vive La France” in honour of that memory.